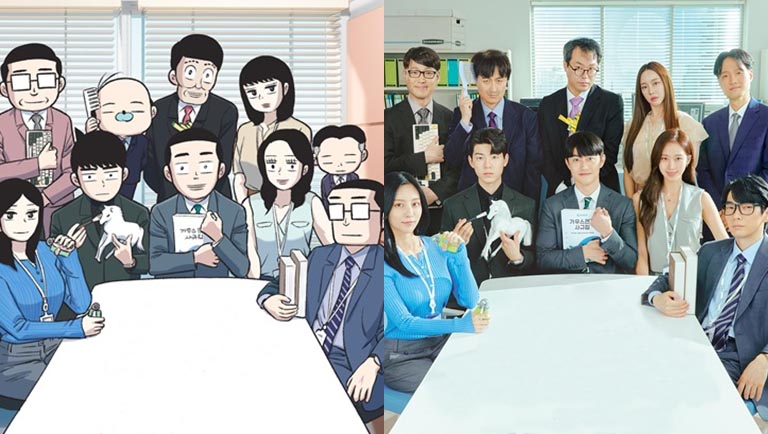 This drama is an adaption of the webtoon “Gaus Electronics” (가우스전자 in Korean) written by Kwak BaekSoo (곽백수).

The leads in the drama are Kwak DongYeon, Ko SungHee, Bae HyeonSeong, and Kang MinAh.

Actor Kwak DongYeon has appeared in the dramas “Vincenzo”, “Never Twice”, and “My Strange Hero.”

Actress Ko SungHee has starred in the dramas “Kingmaker: The Change Of Destiny”, “My Holo Love”, and “Miss Ma, Nemesis.”

Rising actress Kang MinAh has appeared in the dramas “At A Distance, Spring Is Green”, “Beyond Evil”, and “True Beauty.”

RAINBOW member Ko WooRi (“Hello Me!”, “True Beauty”, “My Only One”) along with actors Baek HyunJin (“Political Fever”, “Happiness”, “The Devil Judge”), Heo JungDo (“Mental Coach Jegal”, “Youth Of May”, “Rookie Historian Goo Hye Ryung”), Jeon SeokChan (“You Raise Me Up”, “Nobody Knows”, “Watcher”), Baek SooJang (“The Great Shaman Ga DooShim”, “My Dangerous Wife”, “Save Me 2”), and Jo JungChi (“Imitation”, “Would You Like A Cup Of Coffee?”, “Work Later, Drink Now”) will also be starring in this drama.

SangSik is referred to as the “nuclear bomb” of Marketing Team 3 because he is somewhat ignorant.

NaRae is the exact opposite of Lee SangSik. She can’t control her anger when it comes to him and they argue often.

MaTan is a new employee in Marketing Team 3. He is a Chaebol experiencing getting to know non-wealthy people for the first time.

KangMi is in a secret relationship with Baek MaTan. She is usually the queen of self-management, but when she drinks alcohol she reveals a Hulk-like hidden strength.

SungNam is the Deputy Director of Marketing Team 3.

JangByung is the Manager of Marketing Team 3 who never loses his smile no matter the crisis or ordeal.

WaWa is the Supervisor of Marketing Team 3 who will soon be 40 years old and cares more about hair loss than marriage.

MoonHak dreamed of becoming a novelist, but in reality, he specializes in writing up reports.

MooMyung is a shadow office worker who works behind a veil.

HyungMi is the master troubleshooter who solves every problem with no expression.

You can read the webtoon in Korean here.