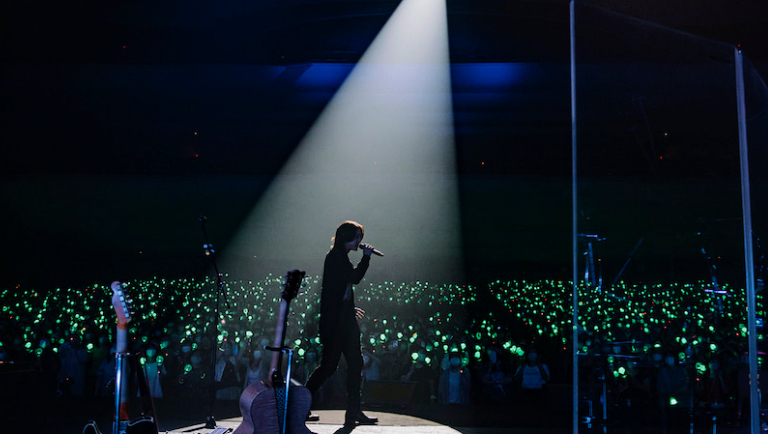 After 2 years and 7 months, Kim HyunJoong returned to Japan live. His visit was marked with so many events that it was likened to a Japan wave.

First, his song, ‘Song for a dreamer’, was chosen in July for the OST of the movie, “Violence Action”. He released the album as a single at the end of August. In celebration of the single and movie release, he gave a surprise free televised mini concert on 9/2. The indie single went on to top the Oricon charts in the week of 9/12 – 9/18. He provided interviews for the album and film in Yokohama.

He then performed his first abroad concert on his world tour called “The End of a Dream, The beginning of a dream”. He performed to a full house of almost 5000 fans for two nights. He showcased 4 new songs off of his upcoming album, “My Sun”.

Following his successful return, he revealed his work on Kotaro Oshio‘s “20th anniversary, my guitar, my life” album. He was featured in the song ‘Twilight’. They performed it together at an event prior to its release on 9/9.

A fabulous return to live performances in Japan after almost 3 years of online concerts and series. He just announced his return for a 2-day Christmas fan meet in December. We know the man and his fans in Japan are enjoying their reunion marked by his world tour.

Note: If you too are looking to send your article to Kpopmap, check out the guideline here.