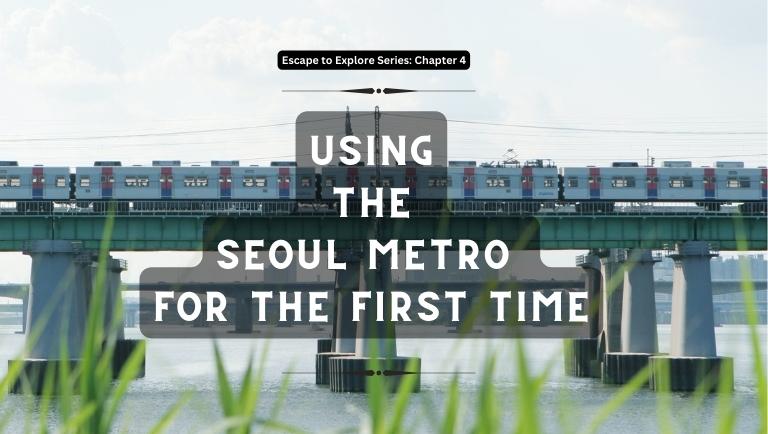 Discover Escape To Explore Series: Using The Seoul Metro For The First Time

Picture of Seoul Subway Outside Captured by Unsplash

In case you missed my last blog post (Chapter 3), Checkout other interns I interviewed about their own experiences in Seoul!

As someone who grew up in a suburban area, learning how to navigate the subway system in Seoul was daunting. Before traveling to Korea, I had only experienced a few times what it’s like to go on a subway, and that was in New York City. My first whole week in Seoul was simultaneously exciting but also nerve-wracking. I was so thankful before my internship started that my program took us around the city and subway station to show us where our work locations were. It took me a whole week to get the hang of it and understand everything around me. Still, the Seoul Metro has become one of my favorite means of transportation. “The Metro is the fastest and most affordable way to get around Seoul. With 22 subway lines making 302 stops around the city, the Seoul Metro is a highly efficient way to get around the city” (Yoon, lonelyplanet.com).

The Seoul Subway station is one, if not the best, subway system. Once you get it, you realize how convenient it is to use!

Reasons Why The Seoul Metro Is Such A Well-Known And Convenient Means Of Transportation:

What’s neat about the Seoul Subway is that all the colors you see on the subway station map are coordinated to different lines. It is organized for everyone to navigate, and the subway runs fast and smoothly. According to Railway Technology.com, “The Seoul subway serving the Seoul Metropolitan Area is the most comprehensive subway system in the world. It runs a full line speed of 80km/hr.” Another well-known network in Seoul is the KTX Bullet Train (Korean Train Express). According to Koreatrain.com, “The KTX bullet trains started operating on Korean Railway System in 2004. Getting to the farthest points by KTX train will only take less than 3 hours. KTX trains run at the speed of 305 km/hr. I had the opportunity one weekend to take the KTX to Andong. Check out below a photo I took of what the inside of a KTX looks like! So far, every transportation experience that I have had in Seoul has been a quick and pleasant ride to get to my destination.

A Photo of Inside KTX Captured by Jordan

A photo of the inside KTX Captured by Jordan

I am always impressed when I get on because no matter how many people go on the subway daily, it is always clean.

A picture with people on the Seoul Metro Captured by Unsplash

Using the Seoul metro is not only easy and convenient but also affordable. Using a T-Money card has helped me throughout my travels using the subway. A re-loadable card is the most convenient way to travel all over Seoul. You must scan it on the card reader before getting on the subway and when you get off and exit the station. You refill money on the card by using cash. It’s a straightforward and fast process that makes getting to your destination less challenging. Here is a picture below of what a T-money card looks like. (You can purchase them in different colors and designs!)

A Photo of a T Money Card Captured by Jordan

What also has been helping me navigate the metro successfully is using the Naver App. The app helps put where you need to go and gives you the best results on which subway line to use and the fastest way to get to your destination. It also provides a map of all the lines to give you a clear view of where you need to go! Down below is a snapshot of the map. I recommend downloading the app before using it to help you get where you need to go during your travels!

My First Day Traveling Solo On The Subway To My Internship

On the first day of my internship, I was really nervous that I would be late due to not fully understanding the subway. Even though I got lost a few times, I’ve learned to never be afraid to ask for help around me. People will help you and direct you to where you need to go! During my first week, I was lost multiple times before understanding how to get to work and home. The more you practice, the better you’ll get at it. As someone who sometimes struggles with a sense of direction, it could be overwhelming to see all the lines, signs, and colors at once. But it’s never wrong to stop and take in your surroundings.

A Picture of Sinseol-Dong Station at Night Captured by Jordan

What I learned about Seoul while walking or even taking the subway to certain places is that it’s a fast-paced city. People get on and off the subway and walk to their destinations as quickly as possible. Growing up in a state where the environment is the opposite, I’m still getting used to the difference in pace. However, aside from that, you will eventually learn and understand your way around things. Once you do, you realize it’s straightforward to navigate.

Takeaway From This Chapter?

As I said above, making mistakes and being overwhelmed by unfamiliar things isn’t anything to be upset about. Just know that it might take a bit longer for things to click, but you will eventually get it. What’s fantastic about Seoul is that the people here are very welcoming and friendly toward foreigners. They most likely won’t judge you for any confusion or frustrations you might have when taking the Metro. It gives you some relief to embrace the challenge of it all and take it day by day.

In the chapters to come, Escape to Explore Series will dive into topics surrounding my experiences shopping, food, and of course Soju in Seoul! Tune in soon to read all about it!

Discover Which Of These Dramas Is The Best Historical K-Drama?