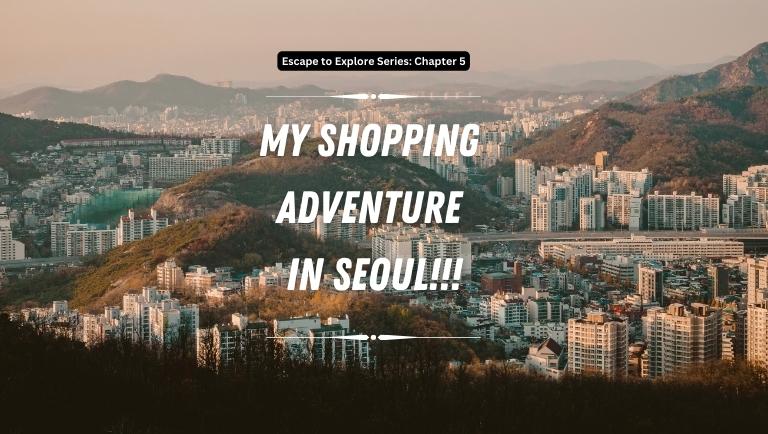 Discover Escape To Explore Series: My Shopping Adventure In Seoul!

Welcome to the next chapter of the Escape to Explore Series! My time in Seoul has been a fantastic experience, and memories I will cherish forever! If you missed my last article (Chapter 4), click the link below and read about me navigating the subway for the first time! If you haven’t already also checkout my previous chapters, please also click on those links to read about my journey so far in Seoul! (Chapter 3), (Chapter 2), (Chapter 1)

This week I wanted to share one of the most well-known things people associate South Korea with- Fashion. Before traveling to Seoul, I prepared by reading up on the favorite things South Korea is known for, and fashion was high on that list. I remember when I first walked on the streets of Seoul, one of the first things I took notice of was people’s sense of style and clothing. As a person who wants to pay a little more attention to the clothes they wear, I thought this would be the perfect opportunity to travel around the city and upgrade my wardrobe!

A Picture of Hongdae at Night Captured by Jordan

To give you some context. The importance of fashion in Seoul is up there. It’s such an integral part of Korean Culture that men and women dress very well all over the city. Many fashion looks in Korea are expanding over the US and other countries through the world of K-Pop, which has boomed the fashion industry in South Korea. An article was written by Sarah Menke on lianox.com about the history of Korean fashion. She stated, “After the Korean War in the 1950s, South Korea’s economy boomed, and that led to a better lifestyle for its people, including a big culture around beauty and fashion.” I also found out recently that Korean couples tend to have matching outfit that represents their love for each other and feeling closer to one another. From Hongdae Street Style to Oversized Korean Fashion, there is a large variety of clothes to mix and match in Korea!

A photo in the Streets of Seoul Captured by Unsplash

Speaking of Hongdae Fashion, I recently visited Hongdae to explore the area. There were so many things to see and visit. Having gone there three times, I spent many of those taking in all the shops and fashion around me. Walking around Hongdae at night with my friends and just exploring the area was an enjoyable activity. There’s a certain vibe to the extent that we are all just comfortable with. We ended up staying till midnight trying to shop for anything that caught our eye, and there were just so many great items and clothes to buy in every store. We looked at so many clothes on the well-known Hongdae Shopping Street.

I think the reason my friends and I kept going back is because not only is there so much to see in Hongdae, but also because I think especially at night, the area is just alive with bright lights, people eating, hanging out, laughing, its very much a hip and social area. Hongdae is an area that I think my friends and I will keep going back to.

A Picture of Hongdae at night Captured by Jordan

A few days later, I had the opportunity with my entire program to go to the Mario Mall in Gason-dong. We spent around two to three hours browsing, trying on clothes, and eventually purchasing a few items. This was the most challenging thing to do as someone who likes to budget money before shopping. That day, I went on a splurge with several beautiful clothes with intricate and unique designs, shoes, bags, and jewelry. As someone who prefers online shopping and likes to take their time buying an item, I just wanted to buy out all of these stores we visited. We ended up browsing through the more expensive stores and working our way down to the more affordable clothing.

An Inside look at the Mario Outlet Captured by Jordan

Whether it was expensive or not, each item of clothing I looked at or tried on was unique, and I started thinking about the style of clothing compared to back home. There is very much a difference in style and the way we dress when it comes to American Fashion and Korean Style Fashion. Korean fashion is expanding, and people worldwide are now wearing this style through K-Pop or just loving Korean fashion in general. I have grown to like Korean Fashion Culture as well!

A Picture of Shops at Night in Seoul Captured by Jordan

Traveling to Korea, I didn’t realize the key differences I saw while walking on the street. Below is a short list of things I discovered that were critical differences in the distinction between the two fashion cultures:

Layers: Koreans Layer a lot. From turtlenecks to having a sweater above that and then having your coat, Americans don’t really have that sort of fashion norm. We do a layer, but less than the Korean Culture.

Cleavage: Even though times are changing, in Korea, You are not supposed to show a lot of cleavages, but for girls, you can show as much leg as you want. In America, there isn’t a specific dress restriction unless your work demands that you not dress a certain way.

Nightlife of Hongdae Captured by Jordan

But overall, shopping in Seoul has been a wonderful experience for me and the other interns. Korean Fashion Culture is fascinating because there isn’t just one particular style. You could go for the Preppy girl look, Emo look, or just maybe the simple casual look, but regardless, there are many clothes out there and in the stores that can help you express as much as you want. So, when coming to Seoul, just be expected to spend lots of money and spend hours walking into many excellent shops!

Takeaway from this Chapter?

– That Korean Fashion is expanding everywhere, and it’s such an essential aspect of Korean Culture
– There are so many areas in Seoul to shop for Clothes
– There are a variety of different fashion styles, such as Korean Hongdae Street Style, that you can choose from.
– If you go to Seoul, just prepare that you might exceed your budget and spend more money than you think on clothes.

Stay tuned for the next chapter in the Escape to Explore Series about Food and Soju in Seoul!