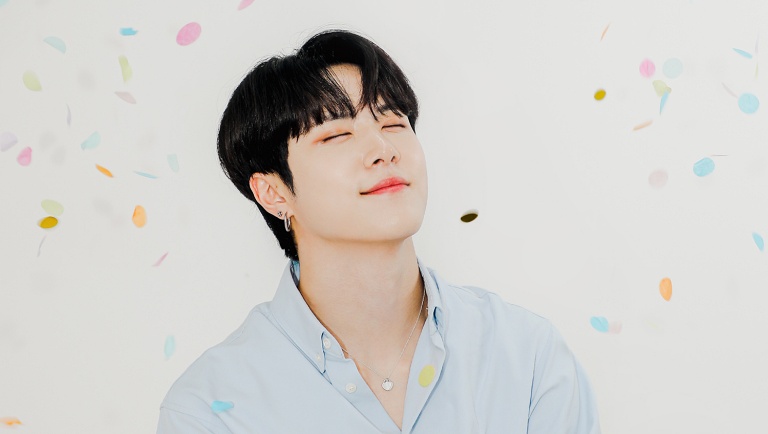 If you are a Kpopmap reader, you would’ve noticed an ongoing weekly series called “Girl Crush” that explores women in the Korean industry that many admire and have a crush on.

Welcome to the thirty-fifth article of our weekly series “Boy Crush“! This series will appreciate the men in K-Pop and K-Dramas that we have a crush on based on anything from their style, talent, personality, overall vibe, etc. We will learn more about the most crushable boys in the Korean industry and their incredible achievements.

Check out the previous articles featuring the boy crushes that have already been covered here!

Readers voted for WEi’s Kim DongHan in our weekly poll to be featured this week.

Before starting this week’s series, you can vote for who you want to be featured in next week’s article. If you would like to see a different idol/actor (not mentioned in the poll) featured in the series, please leave their name in the comments and we will add them to the vote over time.

(2nd Week of Nov.) Who would you like to see in the next “Boy Crush” article?

Please do not refresh any more.
Press the “VOTE” button below.

Let’s get to know our crush, Kim DongHan!

Kim DongHan is famous as a member of the multitalented boy group WEi. The group is known for its vocal power and solid stage presence. You might also recognize Kim DongHan from his days on “Produce 101 Season 2“, as a member of the adored boy group JBJ, and as a soloist in his own right. With an impressive career spec, Kim DongHan is also well-known for his handsome looks, honest nature, and dedication to the stage. Let’s get to know more about this boy crush today!

For those of you who are new to Kim DongHan, here is some basic information about him. Kim DongHan was born on July 3, 1998, and has had a passion for performing for a long time. Before he was even an idol, he was part of two dance crews. The crew based in his hometown, Daegu, was called The Face, and he later joined a team called DOB that performed in Hongdae, Seoul.

He practiced extremely hard with these teams. As part of The Face, they practiced in subway stations hoping to give teens hope of achieving their dreams through their efforts. This shows how much he wanted to succeed. In fact, now that he has achieved his dream, he has said that he hopes to be an awesome singer with a long-lasting career.

During “Produce 101 Season 2” Kim DongHan showed fans that he is a talent to be admired. Many fans spent the duration of the show wondering how it is possible for someone to not only be so handsome but also talented.

In 2017, he debuted with JBJ which was a project group formed through fan requests after “Produce 101 Season 2” came to an end. Despite not making the final lineup, there were several contestants that fans felt deserved to debut and JBJ was the result.

During his time as a member of JBJ, his talents continued to unfold to their true glory and many learned of the endearing charmer that is Kim DongHan. To Joyful (JBJ’s fandom), although the time was short-lived, it was a golden era as a K-Pop fan.

A couple of months after JBJ disbanded in 2018, he made his debut as a solo artist.

Kim DongHan’s soloist era was a time when you could sense that he was really carving his identity as an artist. This is when many got to appreciate the gem of an artist that he is even more. To this day his solo discography is filled with some of the best bops set on replay in our playlists.

To quote one of his fans about his solo career,

“Kim DongHan is just a star. He has that quality and dance charisma.”

In a previous interview, he shared that his time as a soloist was a period of growth for him as an artist and that he was proud of how much he had improved during that time.

As a new opportunity presented itself in 2020, he debuted as a member of WEi.

Some fans had mixed feelings about the prospect of Kim DongHan re-debuting in another group as he shined so brightly as a soloist, but he has proven that his shine is eternally bright no matter how the stage is presented.

His brother-like bond with the other members of WEi has also become a treat for RUi (WEi’s fandom) to see.

Kim DongHan has shown exceptional development as an artist since his days in JBJ and only gets better with each WEi comeback. His star potential has no limit.

Let’s take a dive into more details about each of his talents.

His vocal color has always stood out, whether he is performing as part of a group or by himself. His vocals are especially endearing when singing calm songs that highlight how melodic his vocal tone is. However, he is also skillful when it comes to belting high notes. He has neat vocals that make his fans smile for days on end.

One of his songs that will captivate you is none other than ‘SUNSET’. Check out the music video here.

Another of his most charming points is how stable Kim DongHan’s vocals are. He actually prefers singing live and has been known for how attractive his voice sounds is in real life. It is amazing that he can pull off such stability when performing complex choreographies, too.

Not only is he an incredible dancer but he is the king of the fancam. In fact, some call him a close-up master.

Additionally, he has a superior understanding of dance which helps him pull off any type of choreography presented to him. His moves are accurate, clean, and powerful. However, he also looks light on stage as if dancing is as easy for him as breathing. He is a dominant force on stage and prides himself on putting his best foot forward each time he performs.

Check out his must-admire dance performance of ‘Natural’.

His dance ability knows no bounds and doesn’t limit itself to certain genres either. In fact, he even came in second place for the dancesport category at ISAC this year. Check it out below.

Kim DongHan is not only a talent on the stage and in the limelight. He is talented behind the scenes, as well. He has a knack for producing with a number of credits in writing and composing from each stage of his career. Not only that, but he is skilled in choreographing dances, too.

When it comes to his personality, Kim DongHan has a double charm.

He has a bit of a prankster side to his personality. He loves joking around and teasing those close to him. This is where his cute side thrives, too.

In the same breath, he is very affectionate and a caregiver. He enjoys taking care of his members and is often considered to be WEi’s dad.

However, he also has another side to his charm; his earnest personality. Kim DongHan is also known for his transparency and honesty with his fans. He has shown a vulnerability that is not easy to find in idols by sharing his struggles with fans. For example, it is a well-known fact that he felt an element of loneliness when he was promoting as a solo artist compared to when he was in a group. This is something that many idols who go through the same transition don’t open up about. However, he created a safe space surrounding talking about these topics.

This honesty translates to the way that he interacts with the people around him, too. He has high standards and expectations for performances, meaning that he can be quite strict with himself and even his members. He wants everyone to be the best version of themselves, himself included. This speaks to how diligent and strong-willed he is. It also shows just how much he holds his fans in high regard by wanting to excel in front of them.

The same goes for many spheres in his life. Kim DongHan is athletic and takes his athleticism seriously, as well. He is trained in martial arts, with an exceptional level in hapkido.

You can check out his skills in this video, but be warned that you might wreck any biases at the top of your stan list once you see how well he interacts with the children!

Here are some more random facts about him.

He loves to eat, especially meat.

His favorite animated character is the Korean character Jjangu.

He also has extremely strong fingers that can split a board in two or smash a dent into an apple.

Just when you think you know all about him he will always surprise you with something interesting and new.

Handsome? That’s Kim DongHan to a tee. His facial proportions are attractive with a unique charm that melts hearts. He is especially charismatic in his stage outfits and is not afraid to experiment with them. His tall body proportions make him model material who can rock any fashion look or stage outfit and concept.

When he is rocking a sexy concept he can be particularly alluring. His piercing gaze and the way he smiles are especially appealing.

That same smile has another quality, though. When he is elated, he resembles a big adorable puppy. If seeing him smile doesn’t give you a happiness boost, then we don’t know what will.

To conclude this article, we’ll finish off with another quote from one of his fans,

“I think the idol world was missing a Kim DongHan.”

There is no doubt that his talent was definitely needed in the K-Pop industry. We can’t wait to see more of what he will achieve.

What do you think? Do you have a crush on Kim DongHan?

Check out the other celebrities who have been featured in this series here:

Don’t forget to check out our latest articles below: