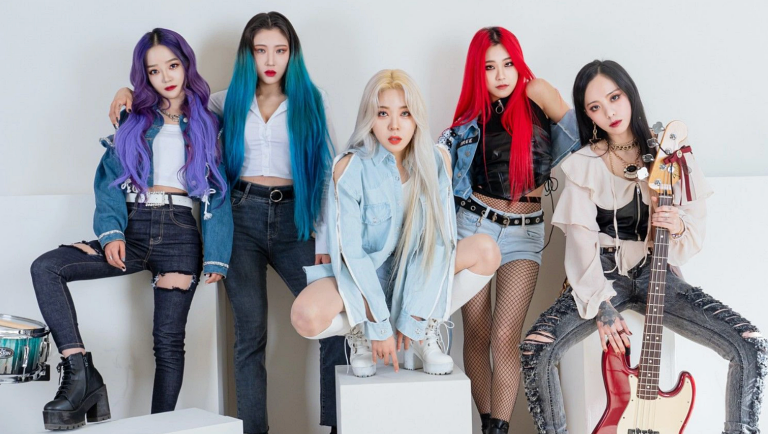 The world of Korean music is vast with multiple artists in a wide spectrum of genres to discover and appreciate. Do you often find that there are artists in your playlist who you feel do not get the appreciation that they deserve? Are there artists who you wish more of the world listened to and knew about?

If so, you’ve come to the right place! Welcome to “Artist Discovered” where we get to know everything about the artist gems in the Korean music world, who deserve more spotlight, regardless of their genre.

On Nov. 2, Kpopmap held a vote to decide which artist should be featured in this article. You can see the results here.

Today we’ll be getting to know all about the girl crush K-Rock band Rolling Quartz and why you should be listening to their music, as voted by Kpopmap readers.

They are a group that is adding momentum to the K-Rock wave in the Korean industry.

How Rolling Quartz was born

How Rose Quartz and Rolling Girls came together

Rose Quartz consisted of the current Rolling Quartz members JaYoung and YeongEun (who were in the same school at the time), as well as HyunJung who joined their band a bit later.

Both bands were active separately when they were introduced to each other by YeongEun’s drum teacher and the two groups decided to merge.

The name ‘Rolling Quartz’ was born by taking the ‘Rolling‘ from ‘Rolling Girls’ and the ‘Quartz‘ from ‘Rose Quartz’ and putting them together.

Before Rolling Quartz debuted, they published a number of covers on their YouTube channel.

One of their must-listen covers is ‘Misery Business’ by the band Paramore. They served a rock world crossover that can only be defined as iconic.

The band was active during their pre-debut period and officially debuted in December 2020 with its single album “Blaze“.

Meet the members of Rolling Quartz

JaYoung is known for her powerful vocals and solid live performance skills. Her voice is often described as symbolic of the essence of rock. She is also gifted at delivering beautiful vocals regardless of the genre she is singing.

Iree is the definition of endearing when she plays her guitar and performs. Her talent is accentuated by the pure enjoyment that you can see on her face when she’s on stage. Seeing her bright expression as she enjoys her passion is truly heartwarming to see.

Before joining Rose Quartz, Choi HyunJung had already given up on music and guitar. She believes in living whilst doing what you want to do and thus believes in giving up when you feel that you want to. However, when JaYoung and YeongEun contacted her to join their band, she gave it a try for the first time in a while and ended up becoming a musician again. Many fans are grateful for the blessing that she picked up her guitar again to show the world her amazing skills.

Arem is a queen when it comes to duality. Not only will her bassist skills captivate you, but her edgy charisma on stage deserves praise of its own. Contrary to her appearance onstage, she is known to be extremely sweet and adorable offstage. She is known to be the member who is the most different from her first impression.

YeongEun’s talent often surprises those who have just discovered her. She is best described as dynamite in a small package. Despite her small frame, she plays the drums with force and with her whole being. You can hear the dedication in the way that she plays.

Additionally, some new fans might not know that YeongEun was DREAMCATCHER HanDong’s drum teacher.

Now that we’ve gotten to know the members, tell us which member is your Rolling Quartz bias in the comments!

Significant achievements throughout their career so far

Rolling Quartz is a group like no other. Not only are they gifted as musicians and artists, but the personal touch on their music is hard not to notice.

The members write their own songs and parts. The first song that they made together was ‘Delight’. JaYoung wrote the lyrics first thinking about YeongEun and then by filling in the song’s details whilst thinking about the other members.

The group often embeds their experiences into their lyrics and takes inspiration from the music and genres that they listen to. They then collaborate and try to make the best song possible with each of their ideas.

The growth of their fandom

As a result of their heartfelt music, they have grown a large fanbase both locally and internationally. The group is especially popular overseas and in continents like South America.

The band grew a lot of momentum thanks to their online concerts and presence on social media that captured the interest of fans across the world during the recent COVID-19 pandemic.

Their fans are so diverse that they spans across multiple countries, ages, etc.

They also have a stunning fandom name, which is ‘Diadem’.

“A diadem is a jewelled crown or headband worn as a symbol of sovereignty.”

Diadem represents a crown and the members are the quartz forming the jewel on top of the crown.

Of course, the group deserves more and more spotlight and to be discovered by more fans. With their consistent diligence as artists it is inevitable that Diadem will grow exponentially.

Collaborations are another industry aspect that Rolling Quartz do exceptionally well. Let’s look at a couple of them.

They released a single called ‘Random’ with the producer duo 015B in 2020.

This collaboration showed the healing quality of Rolling Quartz’s music. With profound lyrics and a powerful conviction, ‘Random” is a song that gives the listener hope in times of distress.

Rolling Quartz has also done a collaboration with AleXa, one of the hottest soloists in K-Pop at the moment, on the rock version of her song called ‘Xtra’ in 2021.

The band added their fresh twist to the song, displaying electric chemistry with their edginess.

Not only does the band have a number of achievements under their belt such as performing at numerous festivals, but they are being recognized for their influence as artists, too.

Most recently, the K-Rock frontier girl crush Band was dubbed as 2022 IISF Ambassadors and will be performing at the festival in December.

These are only a few of their achievements, so far. It is clear that opportunities surrounding them will only become bigger and better as their career continues.

They are not shy to put all of the core elements of rock on display, either. Whether it is a heavy bass sound, powerful drums, electrical guitar riffs, they put it all out there and turn it into passion personified sound.

Their latest song ‘Sing Your Heart Out’ represents that perfectly. The song mimicks the sound of a heartbeat pumping pure rock music.

Their songs simultaneously have a sentimental air to them that makes them not only musically enjoyable but emotional and impactful. Added to their profound lyrics, their melodies tell a convincing story each time.

The imagery in their music videos is also just as intentional and strong. For example, their song ‘Azalea’ showed the beautiful patterned backdrop of a traditional Korean palace, mimicking the majesty of the azalea flower.

Rolling Quartz’s music is not limited to one representation, either. It can be aggressive and colorful or emotional in beautiful subtle tones. It all depends on their vision and we are happy to hear every single track, regardless.

Besides the other songs mentioned in this article (which all deserve to be added to your playlist, by the way), there are a number of must-listen Rolling Quartz songs.

Here are a couple of Rolling Quartz song recommendations to add to your playlist if you are just getting into their music.

Many fans often suggest ‘Holler’ as their go-to song recommendation, citing it as their favorite Rolling Quartz song.

“They took the word ‘slay’ literally. I LOVE THIS. Keep rocking, from across the world!”

– A Diadem regarding ‘Holler’

Another common song recommendation among Diadem is the band’s remake of DREAMCATCHER’s ‘Good Night’.

“The cover version was already awesome, but this studio version adds little bit more important nuances that makes it so much better. An excellent homage of an excellent song by an excellent band to an excellent group. Excellent all around.👍💪”

– A Diadem regarding the ‘Good Night’ remake

What do you think of Rolling Quartz?

Are you a Diadem already? If you are, tell us what you love the most about them in the comments.

If you’re not a Diadem already, will you be joining the fandom? Share your thoughts with us down below.