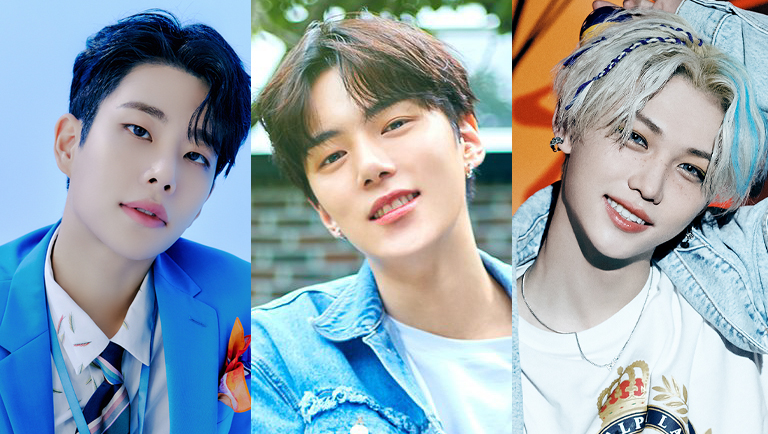 Not every day can be good and free of worries. Despite this, during these particularly difficult moments, we can turn to one of our favorite K-Pop idols to brighten up our day. Just by looking at their pictures or watching a short clip can improve our mood instantly.

While all idols provide a sense of comfort and relief, there are some that have an exceptionally bright and bubbly personality. These serotonin boosting idols are often compared to rays of sunshine and can even be called human vitamins. Previously, we’ve released an article on girl group members who radiate this vitamin-like energy, which you can read below.

But we know that there are many male idols who radiate the same infectious, happy vibes. So let’s take a look at some of these vitamin-like male K-Pop idols who can instantly brighten up your day.

With boyish good looks and an endearing personality, many have become smitten by Park JiHoon’s endless charms. Since Mnet’s “Produce 101 Season 2“, Park JiHoon has shown that he is simply overflowing with cuteness and is able to bring up the mood with a wink alone. He is an idol who will forever be captured in our hearts.

On stage, Felix just overflows with charisma. Part of that is due to his deep voice and hard-hitting rap skills. But off stage, he transforms into a giant ball of happiness, spreading warmth wherever he goes. His smile alone is infectious and you can’t help but feel all giddy inside from just one look. It totally makes sense why his vlogs are titled “Sunshine Vlog”, since Felix shines as bright as the sun.

With a stage name that translates to ‘full sun’, HaeChan is an obvious choice for this list. But his name isn’t just for show as he has the personality to match! HaeChan is playful and mischievous towards his members, even late into the night, providing laughter and fun content for fans. Despite this, he shows that he’s full of affection too, proving to be the perfect human vitamin.

MinHyuk’s bright and cheerful personality has made many fans mistake him for the maknae of the group. But the easygoing idol shows that he’s simply the embodiment of the sun, providing warmth to fans and members alike. Many MONBEBE can agree that MinHyuk has become a source of strength and has helped them to get through the day. Everyone needs someone like MinHyuk in their life.

While KeeHo might be the leader of the group, he often exudes a friendly, down-to-earth vibe. He is the perfect balance of chill and chaotic, causing fans to fall for his charms more and more. Whether in Korean or English, KeeHo shows that he is iconic and the perfect vitamin to help you through hard times.

Sunoo has a cute demeanor that makes you smile and want to protect him at the same time. Even his reactions while eating gives the perfect serotonin boost and can immediately brighten up your day. Sunoo has also used the word ‘vitamin’ to describe himself, showing that he absolutely knows what type of energy he gives off.

Although he is currently fulfilling his military duties, ASTRO’s MJ surely needs to be mentioned. Many AROHA know that he is the perfect embodiment of a human vitamin and the group’s happy virus. Any moment with MJ is filled with such overflowing warmth and ends in side-splitting laughter. His contagious energy carries over to ASTRO and fans alike. We cannot wait until MJ is able to spread happiness on stage once again.

Even in the beginning of his career, DK has shown that he is more than a main vocalist, but an endless source of fun and laughter, too. Quite a few members have pointed to him as being the funniest in the group and he surely does not disappoint. His energy is unmatched, stopping at nothing to entertain his members and fans. Even short clips will leave you breathless from laughing.

If being cute was a crime, DongPyo would be a prime suspect. You cannot deny his adorable charms and his vitamin-like qualities. Just one look will make your day better instantly and a smile will appear on your face before you know it. With such perfect aegyo, it can be hard to believe that he is not the maknae of his group. If you search for an example of a human vitamin, DongPyo would surely pop up as a reference.

Have you gotten your daily dose of serotonin from these idols? Which one is your favorite human vitamin? Let us know in the comments!