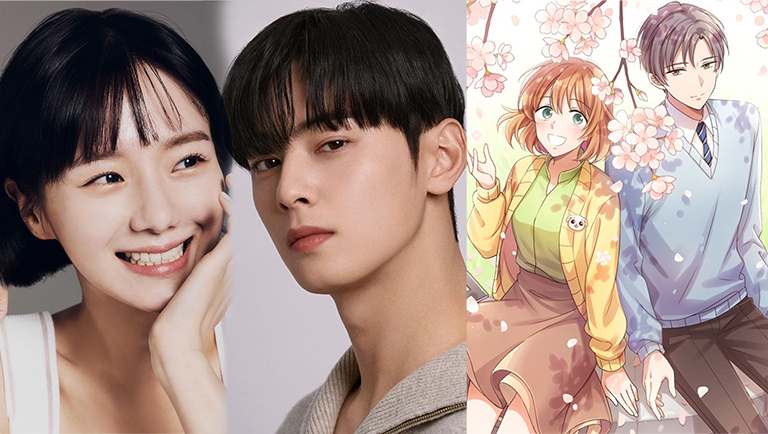 “A Good Day To Be A Dog” is a fantasy romance drama about HaeNa, who is trying to avoid her first kiss because of a family curse that will turn her into a dog, and SeoWon, the only man that can break the curse but is deathly afraid of dogs.

This drama is based on the webtoon “A Good Day To Be A Dog” (오늘도 사랑스럽개 in Korean) written by Lee Hye (이혜).

The leads in the drama are ASTRO’s Cha EunWoo, Park GyuYoung, and Lee HyunWoo.

Actress Park GyuYoung has had major roles in the dramas “Dali And Cocky Prince”, “The Devil Judge”, and “Sweet Home.”

Actor Lee HyunWoo has most recently appeared in the dramas “Money Heist: Joint Economic Area”, “The Liar And His Lover”, and “Moorim School.”

“A Good Day To Be A Dog” is an unpredictable fantasy romance drama about a woman who is cursed to turn into a dog when she is kissed and a man who can break the curse but is afraid of dogs.

Cha EunWoo Instagram / “A Good Day To Be A Dog” webtoon

SeoWon has a fear of dogs due to childhood trauma, but he is the only person who can break HaeNa’s curse.

Park GyuYoung Instagram / “A Good Day To Be A Dog” webtoon

HaeNa is burdened with a family curse that transforms her into a dog after she receives her first kiss. The only way to break the curse is to get a second kiss, but the guy she needs the kiss from is deathly afraid of dogs.

Awesome Entertainment / “A Good Day To Be A Dog” webtoon

BoGyeom is a mountain god who hides a blade in his smile and works with Jin SeoWon.

“A Good Day To Be A Dog” (오늘도 사랑스럽개 in Korean) is a webtoon written by Lee Hye (이혜).

“HaeNa has made every effort to avoid an inevitable family curse… of turning into a dog after her first kiss. Worst of all, the only way for her to break the curse is to get a second kiss. How will that work when HaeNa’s first kiss is with a guy who is deathly afraid of dogs?!” – WEBTOON

You can read the webtoon in Korean here, and in English here.

“A Good Day To Be A Dog” webtoon